Still having problems keeping your hands up?

Believe me. I know how it feels. Here’s a simple trick to keep your hands up once and for all!

Yes, my friend. That’s it. That’s all you gotta do. Tilt your upper body forward just a tiny bit and your habit of dropping your hands will almost disappear overnight!

It sounds too simple! Please explain how this works.

It’s a matter of balance. Your body is always trying to balance itself. Which means…

If you notice, the more experienced fighters have no issues leaning forward. They love being aggressive and getting into their opponent’s space. They love reaching in with big shots and being psychologically imposing. Their body position is more likely to go forwards and leaning their upper body forward makes it easier to put them in motion and in balance to go FORWARD.

The less experienced fighters tend to do the exact opposite. They like to lean backward and keep their head as far away from their opponent as possible. Unfortunately, this means they’ll be leaning back and usually leads to being pushed even further back, losing balance and losing ground.

And if you’re leaning backwards and don’t want to fall back, guess what happens…something in your body has to go forward to counteract the backwards momentum, since you can’t bring upper body forward (because you don’t want to, or because you’re getting pushed back already) the natural response will be to take your hands off your face and move forward and down to try and rebalance yourself. It’s the same natural instinct of how people flail their arms forward when their chair tilts back suddenly off balance.

Other advantages of leaning forward:

You should never be leaning back!

Why? Because when you lean back:

What if you WANT to be 50/50? Or 45/55? Well, boxing utilizes many different positions throughout the fight and it’s normal to shift your axis from many positions to get new attack/defense angles. But the default stance is still generally 55/45. And for some really defensive fighters, maybe closer to 50/50.

Yes and no. Your jabs should be long because you snap out a straight arm and not because you’re leaning backwards to get your head as far away as possible. Doing this would leave your chin stuck up in the

Not necessarily. Sure, one can argue that leaning forward is more vulnerable to uppercuts than leaning backward. But that isn’t an automatic problem. Uppercuts require you to be close enough for them to land. If you keep your distance and don’t overdo the forward lean, you’ll be alright. Not only that but keeping your upper body slightly forward is the best general position for both attacking and defending in boxing.

LAST TIP – look through your eyebrows

The common problem with many fighters is that they try to look straight out at their opponent, just as they normally would in their daily life. When we talk to someone or want to look at something in the room, we face our head and eyes in that exact direction.

The problem is this can negatively impact your boxing position. See in boxing, many fighters try to practice being defensive by leaning forward and tucking their chin. They’ll do it a lot on the heavy bag. And it sounds like a great idea except only…because their head is tilted down, they start to look DOWN at the bag instead of looking at their opponent’s eye level. They’ll punch lower on the bag, and feel defensive with their chin tucked.

They fight a real opponent and find that they have to lift their head up to see their opponent and thus, their chin is lifted! YIKES!

So my trick is to look through the EYEBROWS!

This way your chin can be tucked and head tilted down a little and still you can see your opponent. Get used to look through your eyebrows when shadowboxing, hitting the bag, basically any punching drills where you don’t have a live person in front of you. Try it now and you’ll see a world of difference in your boxing defense. You’ll be able to keep the chin tucked AND still see your opponent!

I see many guys in sparring trying to wear their headgear so low to cover as much forehead as possible. The problem with this is that it blocks your vision when you try to tilt your chin down…this makes you lift your chin to punch because you’re trying to see. 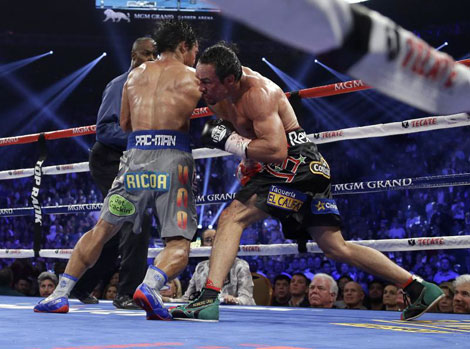 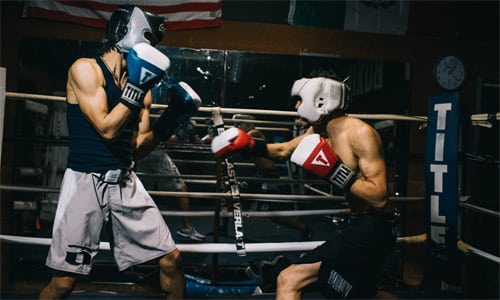 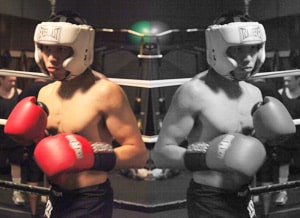