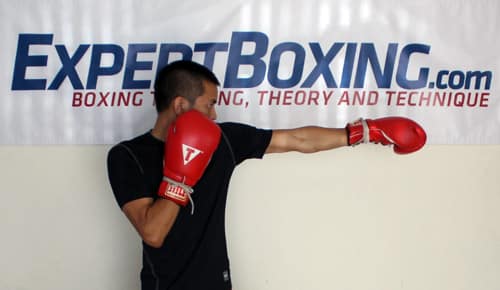 While the jab isn’t as exciting as the cross, hook, or uppercut, the jab is more useful than all other punches combined. The jab can punch, push, distract, create openings, or even defend against your opponent’s deadliest punches!

Here is my official boxing guide on throwing a proper jab. It’s complete with pictures, videos, and explanations for all the common nuances of the jab.

Learn how to throw your #1 punch!

I don’t remember what I wrote on the jab 4 years ago when I first started the website. That was 2008, this is 2012. I look to re-do many of these basic guides with newer and more complete boxing instruction. Thank you for your patience!

The jab is a boxer’s most important weapon!

In case you haven’t heard it before: the jab is your #1 weapon! But WHY is it your number one weapon?

Compared to ALL OTHER PUNCHES, the jab is faster, longer, most likely to land, and least likely to leave you vulnerable. The jab uses less energy than any other punch and still keeps you in position to follow up with a dangerous power punch (ie: the right cross). You can use the jab to punch, to push, or even to distract. It’s accurate and effective from many angles even if you have limited skill. Do you know of any other punch that is still equally effective when thrown while moving?!

The jab isn’t just an offensive weapon, it’s also your best defense! Instead of blocking or slipping or rolling, you can counter just about any punch with the jab! The jab can do everything: your offense, your defense, your entire boxing ability can measured by the skill of your jab.

How to Throw a Jab

1. Stand in your boxing stance 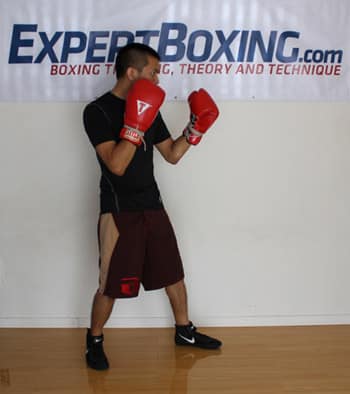 Hands up, elbows in, hips between your feet, knees slightly bent, and back heel lifted. Front foot at slight angle generally pointing towards opponent, back foot about 45 degrees diagonal. (Note that my back foot doesn’t look very diagonal because the heel is lifted, making it appear more like 90 degrees.)

The beauty of the jab
is that you’re always in position to throw it. 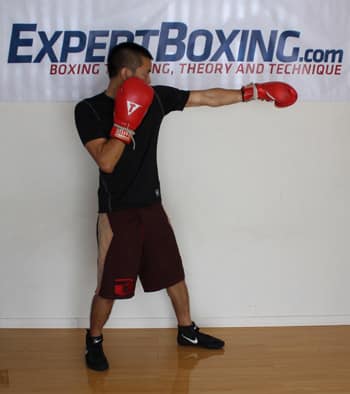 Now extend (PUNCH) your front glove (left hand for orthodox, right hand for southpaws) towards your opponent, while exhaling a sharp breath.

The most relaxed jab is the fastest jab. 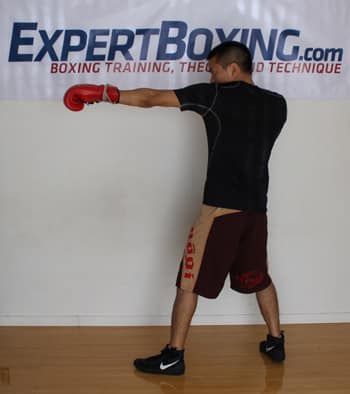 Ok, it’s about to get tricky for you beginners! While the glove is extending outwards, ROTATE YOUR ENTIRE FRONT ARM so that your punch lands with the palm facing down and your shoulder rotated up to cover your chin.

I know I broke the jab down into 3 steps but in reality, it all happens simultaneously. Your arm extends quickly outwards as it rotates, and your jab lands with a tight fist and rotated arm right simultaneous with a sharp exhale. The result is a sharp snapping jab!

*** Watch my video above to see some live demonstration of a proper jab!

Common Mistakes with the Jab

Mistake #1 – elbow comes out sideways aka the “chicken wing” 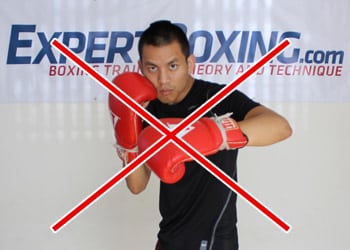 BAD! Don’t let your elbow fly out like that. I know you’ve seen the pros do it on TV or maybe you discovered it yourself as a cool way to whip your jab up while your hands are down.

Here are some problems you’ll find with a “chicken wing” jab: 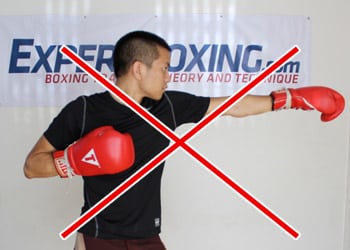 WHOA! How did this happen? Everybody knows what this clown is gonna throw next! Anyway, dropping your right hand is just plain dangerous. It leaves you vulnerable to left hook counters and telegraphs your right hand follow-up. A longer armed opponent will easily counter all your jabs with left hooks.

Mistake #3 – reaching with the head 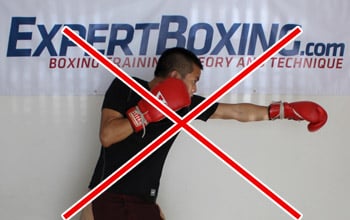 Many fighters do this for reach or power. Hey, it works if you want to steal a quick point or have some tactic behind this. In terms of general boxing purposes, this is bad technique.

Mistake #4 – not lifting the shoulder 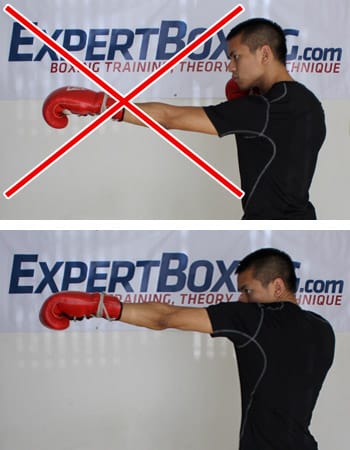 See the difference between lifting the shoulder vs not lifting the shoulder? It results in less power, less reach, less rotation, and even leaves your chin open to counter rights. Beginner boxers should be drilled until they no longer make this amateur mistake.

Mistake #5 – popping up with the jab 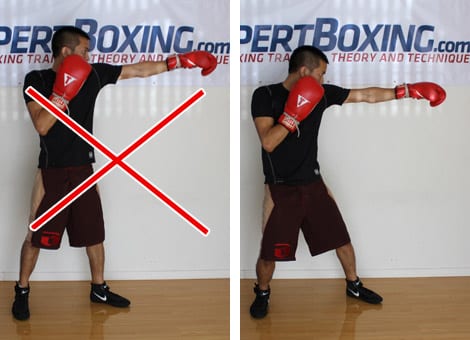 WHOA! Why are my legs so straight?! Why am I trying to stand up so high?! Many beginners commit this crucial mistake because they were taught that punching power comes from the legs. This is true but it doesn’t mean you should straighten your legs while punching.

Straightening your legs during the jab results in:

Mistake #6 – rotating the foot or body 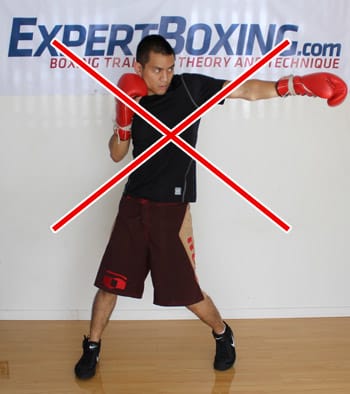 This isn’t bad technique, it’s just not a jab. Rotating the foot and body gets you a totally different punch called the “left cross”. Most beginners will probably resort to this technique in effort to increase their jab power. The jab is straight, fast, and surprising. A left cross is rotational power making it hardly any different from all your other punches.

The left cross definitely has more power but lacks many of the jab’s qualities:

The left cross is not a jab,
not even a more powerful jab.

Variations of the jab

Here are some fun variations to the basic jab. You will need to master ALL of these in order to be a successful boxer! (Note: I’m not putting any pictures for these because they will have their own instructional guides later.)

The step jab will most likely become your number one punch because it’s fast, powerful, and brings you into range. It’s more powerful than your regular jab and also has more reach because you’re stepping forward.

The most common mistake is to try and step too far. What ends up happening is that your punch lands before your foot hits the ground and you have less power OR you get countered or pushed off balance because you were floating during the jab.

Try standing just outside your opponent’s reach and then using only a very tiny step to bring yourself in range. This is what makes you fast, powerful, AND EFFICIENT! The pro’s take small steps, not giant ones that leave them vulnerable in the air.

Step jabs have more power and reach than regular jabs,
making them your #1 weapon!

How to throw a step jab

***Note: you can also throw back-step jabs. Jab while stepping back with your BACK FOOT and recover the front foot as you recover your front arm.

The body jab is incredibly useful for scoring body shots, distracting your opponent downstairs to land right hands upstairs, or even pushing him off balance. The body jab is also a natural counter to the jab. The common mistake is to telegraph your jab to the body by looking down at his body (instead of his head) AND/OR crouching down too low when you do it. If anything, you crouch down only enough to avoid his oncoming punch (like a jab). Otherwise, getting low is not necessary to land body punches!

Body jabs can punch or PUSH your opponent.

How to throw a body jab

The most common mistake for pivot jabs is to over-rotate. Jabs thrown with a wide pivot have less power because you were floating too much on one leg. Pivoting too wide can also turn your back towards your opponent AND/OR make it harder for your right hand to reach. Unless your pivot jab is purely for escaping the corner and spinning your opponent, smaller pivots are usually more ideal. The general idea is to pivot only enough to avoid your opponent’s attack, otherwise your focus should be on grounding the feet as quickly as possible to counter.

Pivot jabs allow you to attack
while moving out of harm’s way.

How to throw the pivot jab

In moments when you see an opportunity to land a jab but nothing else, the power jab will make a great impression. In all other moments, it’s best to land a fast jab and follow immediately with the right cross, left hook, etc. In other words, the power jab is great for POWER potshot-ing.

The most common mistake is to try and use power jabs as your normal jab; you end up waiting for opportunities instead of creating them with lighter faster jabs.

The power jab is useful for landing single shots,
but not for combination punching.

How to throw the power jab

Final thoughts on the jab

It doesn’t matter what style of fighter or what level of fighter you are. The natural game of boxing gravitates towards a jab fight. Whether you like to box or brawl, throw in high volume or high power, attack or defend, you will need a jab. A stronger fighter needs a jab to create openings for his right hand just as a weakened fighter needs a jab to keep his opponent away. The jab is essential whether you’re trying to win by knockout or decision.

The more skillful a boxing match,
the more important the jab becomes!

FINAL JAB TIP: The jab is for boxing, not fighting. 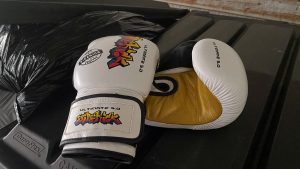