Let’s be real…nobody reading this site is good enough to copy them (that includes me), but in the spirit of artistic appreciation…let’s make our best attempt!

Moving your head to avoid getting hit is a natural defense instinct every fighter has. You’ve probably done it before as a beginner without any instruction; jerking your head around nervously to avoid punches. I’m sure you’ve seen street fights where both guys duck their heads straight down or pulled it straight back to get out of range.

You may have also seen beginners being yelled at in their amateur fights to “move your head more” and so they start bobbing their head side-to-side automatically without any punches being thrown. This is a perfect example of beginner-level head movement, where it’s only used for defense and nothing else.

As I write the 2nd and 3rd parts of this series, we’ll go over head movement WITH counter-punching. For today we’ll go over only fancy evasion tactics and nothing else!

For those needing a more basic head movement guide, please check these out:

Some basic head movements you should know before putting together your evasion dance. Aside from defense, head movement should help you find your defense rhythm!

Head movement should help you find your defense rhythm!

Time to start putting together your own EVASION DANCE!

Oh, this is gonna be so much fun! We are now officially ready to start wiggling our heads around and coming up with our own “evasion dance” or as I also like to call it “the joystick dance”. I share some classic head movement patterns as well as the ones used by the pros!

No matter how much trainers yell at me for it, I will always enjoy it from time to time. It’s an incredibly useful skill to practice even if you don’t use it in a real match. And best of all, it’s fun as hell!

Just string different evasive movements together to create your own unique evasion dance!

These head movement patterns are for baiting punches and getting you into the rhythm of slipping and avoiding shots. They’re relatively safe to do and great for the beginning of fights. You can get in and out easily without much risk and also without showing all your slip patterns early.

1. Back-and-Forth, then Roll Under (classic roll under)

This one is a classic range-finder type of head movement for the opening rounds. You do a lot of quick head darting going in and out to draw his jabs. At some point, he’ll get tempted to throw some power shots and when that happens, you roll under and through and come back with a left hook, or pivot off and return a right hand. NOTE: the pivot works better if he’s really aggressive and coming into your space.

2. Bend-over, then Roll Under (bait stall)

So simple and yet so effective. Bend over (forward or side) and wait for a moment before you pop back up. He’ll either wait for you or swing at your head while you’re bent over…simply duck even even lower, rolling under (backwards) and up. Can even do it slowly/casually for maximum slickness.

Great one for just getting in close and getting your opponent to throw his shots, then walk yourself back out. You can also do a blade turn after the torso tilt to really make some separation. Keep the energy relaxed. And try to resist taunting him as you’re only encouraging him to chase you down with heavy shots. Try to lull him to sleep so you can surprise him later.

This is a funny one used by cocky tricksters. They’ll kind of slip in and out and then pull back only their head and neck. It’s like a one-inch slip. Just to let you know they’ve totally got your range down.

This is more for establishing your rhythm than to avoid punches. You tease your head back and forth to draw punches, roll under them, and then pivot away. It’s slick and let’s you get close without taking any damage. Useful for drawing shots to study your opponent’s attack patterns.

These head movement patterns are for getting into close range and letting you take your opponent’s space. They’re great for avoiding tons of power shots while also keeping you in range to counter. These movements are also very flashy and can intimidate opponents or discourage them.

Sneaky tactics to get your opponent swinging and missing. Tease with your head moving back and forth, then lean back to bait long punches, roll under those punches, and right as your head is about to come up again you surprise him by bending down 1 or 2 more times. Lots of smooth motion mixed in with jerky movements. Be careful not to do this too early as it gives away your head movement pattern. Do it mid-fight.

This is VERY aggressive. A bit of slipping, roll under once or twice, then shoulder roll right in front of your opponent. Then do whatever you need from here.

Come right in, slip some straight shots, roll under the big ones, pivot around and then duck under as he swings at your new position. This is a great way to crowd him and make him uncomfortable or anxious.

Great tactic on the inside. Bend your head over onto him for a bit and then pull it away as he swings a hook. If he’s still swinging, duck under or even bend-over again. If you want…can even grab his waist at this point or pivot out.

These head movement patterns are for pure defense such as when you’re cornered, hurt, or just trying to get out of a tough place and not looking to fire back at all. Because these patterns can easily avoid many punches, you have to be careful not to resort to these every time. Remember: you can’t defend an opponent to death, you have to throw punches!

Escape tough situations, without countering back.

Duck straight down (can sit on the ropes if you want), start tilting your torso at different angles. At some point when he really starts to over-extend himself, you pivot around and then arm balance to lean your head all the way out of range as you walk out calmly. Really really slick!

Great tactic for taller rangier fighters. Slip some shots, then start rolling and finally, bend over to get your upper body out of the way entirely. You’d be surprised how many shots you can evade easily with this pattern.

Slip some shots, then block some shots with your back hand (switching it to both sides of your face), then shoulder roll off the rest of the shots. If you absolutely need, roll under and then pivot or step away when your head comes back up. Keep it relaxed and stay in rhythm with this one.

Catch some on your gloves, roll off some punches, then go under. You can also go straight to the shoulder roll, then roll under, then catch the final shots on your gloves…this is harder to catch the rhythm but allows you to counter.

This is basically Pernell Whitaker type of stuff. Dip into your knees, roll your head around real quick, slip sharply at different angles, and then lift your head up and backpedal away.

Love this video. Watch the pro mix in ducks, tilts, and roll-unders. This is standard pro-style movement. Notice how he teases…mixing regular slipping and then bending down extra when the other guy swings. And then when he’s evading long combos…just wiggling his head all over the place. So much fun.

Lessons from the master! So much tricky head movement on the inside. So many clever subtle movements. Notice he even slips in slow motion at times. He gets his head in close, bends over, and then rolls to the side and under many times. So incredibly relaxed without any care in the world. This is how comfortable you can be when you establish a slipping rhythm that matches your opponent’s punching rhythm (yes, that’s part of the secret).

One of the greatest defensive talents ever. Precision slipping, athletic ducking. I love how he goes from super smooth to super fast whenever he wants. Similar to Prince Naseem, he also likes to lean back a whole lot. Notice how he uses his hips to balance his torso bending every which way.

So relaxed and so slick. Lots of shoulder rolling and bending over. He makes opponents reach all over the place for him.

You have to watch his fights in full to get a complete understanding. He’s a genius and extremely unorthodox. All his slipping eventually takes his body and head to a “leaning-back” position where he punches incredibly hard from. Lots of pulling his head back, rolling under shots here and there. He’s smooth when he wants to be and then herky-jerky at other times.

A lot of ducking and lean-backs, and funny neck pulls. It’s harder than it seems. You have to mix in some subtle slipping and shoulder rolls, also punches, or else opponents will over-run you with constant shots. Here’s another great video of him.

Cuban master at work. Lots of bending over and lean backs…even pivoting from the lean back position. And then many little twitchy shoulder rolls and angles. He makes you reach just an inch, then an inch more, and then he bends or pivots fully out of the way as you lose your balance. This guy is so damn cagey.

An incredible legend whom we don’t always remember for defense. He was known more of as a welterweight Ali, fast flashy hands and swift footwork…but here you can see his incredible slipping on full display. Lots of slick ducking under and clever pivots, also subtle neck pulls and turning away from shots.

Not having to punch allows you to have more creative positions.

The beauty of doing EVASION-only type of head movement is that you have so much more creative range and flexibility in how you move. Not having to throw punches opens up more unexpected positions making you an even more frustrating target to hit. For those of you wondering if it’s safe…yes, and no. NO, it’s not safe because you can’t fire back and smart opponents may capitalize on that. But then again, YES, it’s somewhat safe because many of these positions can make you more defensive or allow you to get into clinching opportunities further limiting his ability to attack you.

As with anything in fighting, all movements are calculated risks. Slipping in and of itself cannot win a fight. However…frustrating an opponent, making him doubt his own attacks and just overall being more cautious of you…that certainly opens the door for you to gain control of the fight. Boxing is 90% mental, remember? 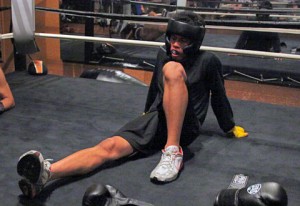 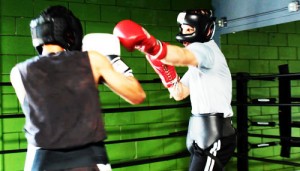 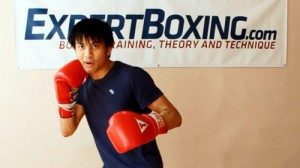 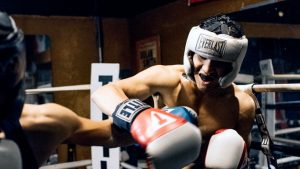 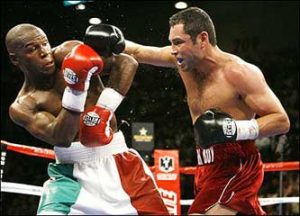