The truth is…there’s no such thing as “fighting on the outside”.

And the reason why is because most people think it means to “fight from long-range”. Even worse is when they try to do it by staying far away or going backwards.

The only thing that happens when you try to stay far is you run out of space and get beat up along the ropes.

The problem with going backwards…

The alluring invincibility of the backstep.

Every boxer in the world instinctively knows the backstep as the “Get out of Jail Free” card in fighting. Getting overwhelmed? Eating shots? Can’t see his punches? EASY, JUST BACKSTEP!

So simple. So safe. Just back-step and you won’t have to worry about seeing, let alone defending against scary punches. And it’s true…the backstep can very easily avoid any punch! It’s statistically safer than blocking, slipping, rolling, or ducking. Just step out of range and absolutely nothing can hit you.

…the trusty back-step has one Achilles heel….

The back-step doesn’t change your scenario.

At best, your back-step gets you away from one or maybe two punches. And then what? Your opponent just steps forward and now you’re back in the same place (but with less space). Are you gonna try an actual defensive maneuver this time? Or are you gonna just hit the emergency backstep button again?

Doesn’t matter, BECAUSE YOU CAN’T!

There’s no space for multiple backsteps.

Think about it. Imagine you’re a defensive-minded fighter or like to run away a lot. Now put yourself at center ring. How many backsteps can you take? I would say TWO—at the most!

See for yourself. The first backstep takes you away from the center, and the second backstep puts you on the ropes. Even if you’re a small fighter in a huge ring, you may not be on the ropes after the second step but you certainly will be close enough for it to affect your psyche.

And then you gotta think of the backsteps you’re taking. Are they micro-size backsteps designed to keep you in an aggressive countering position? Or are they big panic jumps to get you as far away as possible? My guess if you’re reading this guide, is that it’s the latter.

The only way to “get away” from your opponent.

The moment you try to “get away”, you’re gonna be stuck on the ropes. TRUST ME!

Let’s just throw A out of the window for now. It does work. If you’re super athletic and agile and your opponent moves like an Ikea table with a missing leg…sure, you might be laughing all the way to the scorecards. But I’m willing to bet it’s more like you nervously running out of energy and your opponent is a frenzied shark that smells blood.

Circle AROUND your opponent

It’s better if you use option B (lateral movement). Circle around him. Either clockwise (to his right) or counter-clockwise (to his left). I’m gonna repeat again. CIRCLE AROUND HIM! It’s the only way to always have space to move.

Why circling your opponent works so well

REASON #2 – You stay in punching range.

This is a big one. The only way to prevent yourself from running out of space is to keep your opponents from advancing. You have to make them think. Can’t just let them walk in for free. And you can’t fire back counters if you keep jumping yourself out of range.

You can’t fire back counters if you keep junping out of range.

But watch Muhammad Ali or Sugar Ray Leonard and what do you see? All those times you saw them running backwards. Look carefully!

…were they really running backwards?

Or were they moving laterally and sticking the jab in their opponent’s face? (Notice how they “ran” but they were still in range. Ahhh yes, THAT was the difference.)

I think this is one of the genius simple secrets of lateral movement. And I’ll try my best to explain why but I’m scared because it sounds too simple. I think half you reading this guide will step away thinking I’m a genius and the other half of y’all are gonna think I’m smoking crack.

I know some of you have heard stuff before like….”always circle away from his power hand” or “whatever hand you circle towards will be the one he can hit you with”. I think it’s only like 30% true.

The other part of that truth is I think lateral movement makes you so much harder to hit.

If you don’t believe me, you can try it for yourself. Stand there and try to punch at diagonal angles to your sides instead of in front of you. Do you see how weird it feels????

How to move laterally

Yes…because the HOW is even more important than the WHY.

Adjusting your lateral circling angle (CLOSER vs AWAY)

There’s a very noticeable difference in what your opponent feels by the way you circle around him.

Which one is the right one for the situation? You have to test both and see. You only have to make a small difference but it will feel completely different for your opponents. I’ll try to give you ideas.

Most fighters that try to “move laterally” will turn their body totally sideways and shuffle to their sides like some kind of basketball defense drill. It’s ok. It’s one way of moving laterally and totally works. It allows you to keep your opponent in front and throw good counters.

But I know another way… 😉

My god, when I figured this out I felt so slick. I felt like I was Ali. Go watch the footage again. All the slicksters do it. Watch carefully, they are not skipping forwards or sideways…they are SKIPPING BACKWARDS when they circle!

Now pepper your opponents with the jab while you do it. And if they over-reach, just set your feet and blast them with your right hand. Oh yeah, you’re a champ now!

But don’t go anywhere, I still got more for you!

Many fighters think too defensively when they use lateral movement. Instead of keeping their slight crouch, they pop their bodies straight up and stick their head (and chin) way up into the air. Which makes them a big target for the swinging lefts and rights. And I understand why they do it. It’s because they want to stay away and feel farther away.

But I beg you not to do that. Keep your head slightly down and in. Even better for your head to be reaching slightly TOWARDS your opponent rather than UP in the air.

And then when you do your fancy backpedalling, just keep that head down, ok? Don’t straighten up. You’ll actually feel surprising elusive. It’s like you can bounce up and around AND still duck under punches when you want. I hope you’ve been skipping rope a lot…you’ll feel a solid rhythm that gets over and under punches easily.

Here goes another tactic that sounds so stupidly easy but just hear me out, it really works. It works even if you’re a beginner fighting a pro. Here are the 2 different kinds of two-direction switches:

Example for #1…if you want to escape out towards your left, you should go right first and then when your opponent commits or moves to that side, you switch and go the other way. The first step doesn’t even have to be a step. It can be a half-step or just a head fake. Whatever little movement you can make that makes your opponent react or even better (he moves in the wrong direction) is all you need to make an opportunity for yourself. Don’t forget…instead of faking sideways, you can fake a slight forwards movement to make him think it might be a punch!

Example for #2…if you want to escape out towards your left, you can go left first and then go left again! Your opponent might not see that coming as he might have thought you were going the other way. This tactic is especially useful against smart opponents who don’t react to your first movement. The trick here is to actually take a half-step or even a full-step in your first movement…and this way if he didn’t respond, you were already halfway out the door and just need one more movement to escape! Hahaha!

So what does “fight on the outside” really mean?

Honestly, I have so many technical interpretations of this saying and I don’t want to get into drawn-out theoretical explanations right now. I think at the core of it, “fight on the outside” just means to keep moving. As long as if you keep moving, and keep finding ways to keep moving…you will always be “outside”. Because think about it…if you can’t move backwards constantly, then that means you’re moving sideways. And if you’re moving sideways and circling, you’re always in position to move again. Conversely, the way to “fight inside” is basically to stop moving, or to move forwards.

Don’t do it in shadowboxing. Don’t do it against the heavy bag. If you want to go backwards or make distance, do a diagonal backstep (to your back-left or back-right) but never straight back. Try to break that habit as much as you can. And all I want is for you to break the HABIT. It doesn’t mean that you can’t ever take backsteps! Sure, use it…but only if it’s the best option in your situation. Don’t use it as the default option.

The goal is whatever move you make, do it in a way that it gives you the option afterwards for another move. Circling, attacking, lots of head movement. All those things will help you “stay on the outside”. Running backwards will not.

I’m sure you’ve seen incredible champions backpedalling away to easy wins…but I hope you see now that they were just circling a lot. Sometimes loosely circling along the ropes. Other times tightly circling and angling around their opponents.

So next time you want to “stay on outside”…go over, under, or around…but never try to run away! 😉 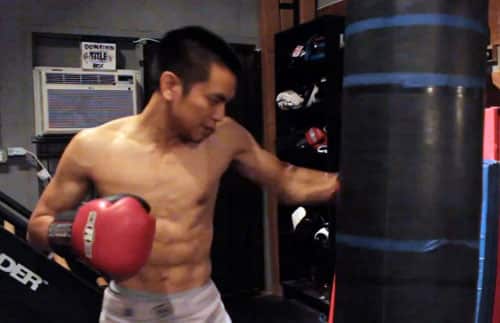