1. Which defense style is best for each type of opponent? – DKL

Shelled up (Arthur Abraham), Cross-arm (Joe Frazier, Gorege Foreman), Shoulder-roll (Mayweather), Peek-a-boo (Tyson). Can these be used in combination? Which is the best offensive plan for each?

2. How can a southpaw throw a left hook? – Shawn

3. Do you know any specific drills to get inside? – Kamran

4. What is the falling step? – Sibtul

What is the falling step? I read about it Jack Dempsey’s book “Championship Fighting” but don’t understand it. It was said that a falling step generates a lot more power.

6. My joints hurt when I hit the heavy bag. What is wrong? – Leo

Hey Johnny, EVERY time I hit the bag my joints hurt like crazy the next day. Not my knuckles but the ones right above them. It’s always my left middle finger and now on my right pinky finger. I really don’t know what it is but maybe its the way my hands are inside the glove. I grab what feels like a little handle in the gloves, is this the problem? What should I do?

7. How would you fight against Manny Pacquiao? – Chris

8. How would you fight against Floyd Mayweather? – Chris

9. How do I beat the bigger guys that keep swarming me? – Stefan

I am in Western Australia and I have been sparring some Mauri (native New Zealanders) boxers lately and they’re much bigger than me muscle/fat wise.
Most of them just swarm in on me and want to get me to the ropes, pressuring me. My style is more of a boxer/puncher and I weigh 75Kg.

My trainer tells me to hit or counter and then move all the time, but these big guys are not respecting or feeling the impact of my jab and it’s not fun to be running around the ring constantly.

The training ring is not huge so there is only so many steps I can take to move around. What can I do?

10. When you box, what should you be thinking about? – DKL

I can’t figure out if I should be thinking about defending myself or throwing punches. It seems like the less I think, the better I do. If I go in there with a certain goal, I do well. Like, I’ll step in the ring and I’ll think to myself “Be busier”. And that’s it. Then when I do that, I do better it seems like. I’m less afraid.

When I start to think about specific’s like, “throw the jab out lightly to set up your big right hand” or “this guy looks like he can hit hard, so try to stay away from his power hand”, I’m too worried about getting knocked out, that I end up getting hit a lot anyway. If I try to think about setting something up, some combo or a power shot or something, I end up doing worse. Maybe you can do an article about this…

11. How to lose weight before a fight? – Jerome

I have a fight in 3 weeks and I need to weigh less than I am now (84 to 81 kg) which is the healthiest way to lose weight in a short time?

12. How long before an amateur fight should one stop having sex? – Angel

13. What are some good old school training drills? – Javier

14. What is a good way to connect with the left hook? Body and head. – Javier

15. How can a taller boxer fight a shorter boxer without getting tired? – AMAN

– I’ve released the guide here: How to Beat a Shorter Boxer

17. What is a good exercise to improve balance? – Jared

I’m wondering if you’ve got any weigh in tips? I box at 75kg and walk around at about 76kg when i weigh myself in the mornings, but this go’s up to 77ish during the day. I normally weigh in around 6pm, which means I have to get down to 74kg in the morning, and it can sometimes be a close call. It’s never happened, but I dread the day that I don’t make weight – all that hard work wasted. Can you offer any advice?

P.S. I heard george foreman would hit a heavy bag for 15 minutes

I’m an amateur boxer. My fights are 3 rounds for 3 minutes.

22. What is the difference between Mexican-style hand wraps and the traditional ones? Which do you prefer? – bhop

23. I have a long reach and my arms tire quickly, what exercises can I do? – Anthony

24. How often do you see hand/finger injuries in boxing? – Ev C

Can you give some recommendations on stretches and exercises for hand strength. I have been boxing for 2 years and recently have developed trigger finger at my knuckles on my left hand (where they click into a fist-it is not painful; just annoying). I know that you are not a doctor, but I was wondering if this is common in boxing and do you think I should hit a heavy bag?

27. Could you possibly give me some tips on defense please? – David

When under a lot of pressure I either shell up or turn my shoulders and lean back to my right with my right hand in front of my face kinda like Floyd/Lights Out. It works usually but it doesn’t feel like the best position to counter-attack from and I feel like I need a few more alternatives.

28. What are some good tactics for southpaws? – Tony

29. Do you know any ways to weight train your legs without putting so much pressure on your knees? I’ve tried squats but can’t stand the strain on my knees. – Neal

30. How effective is the title fast feet product and how should I use it? – Enrique 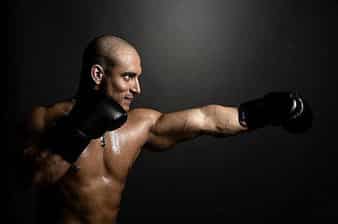