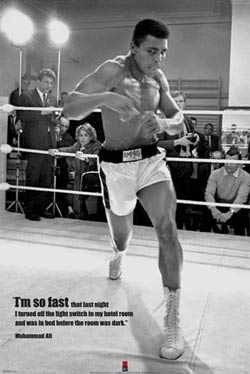 Tired of crappy guides on improving handspeed written by people with no boxing experience? This is the real deal!

Ok, punching faster, handspeed, quickness of reflexes. These things are all related. It’s not hard to do or hard to practice, but it is most definitely hard to learn. From what I’ve seen, most people punch slow because they have the wrong attitude and the wrong training. Even most of the fast guys that I see in the gym don’t do any specific drills to improve their punching speed.
I don’t need to tell you how important it is to have speed in boxing. Look at Muhammad Ali. Look at Roy Jones. Look at Pernell Whitaker. Look at Floyd Mayweather Jr. Not only are they winning, but nobody can touch them. There are very few things that can equal out handspeed. Regardless of how powerful you are, if the other guy’s punch lands first every time, he will beat you easily!

Follow the punching methods below for improving hand speed!

Everything that you do starts with the mind. Before you blame your poor handspeed on genetics, undeveloped muscles, or unknown punching secrets, you need to analyze your own mindset. The first question is, “What am I consciously doing anything to improve my handspeed when punching?” If you’ve never asked yourself this question before, the answer is probably “NO”.
The most important mindset you must have to punch faster is to focus on awareness. Your eyes need to be trained to quickly recognize a target and then passing the signal to your arm, telling it to punch. Forget about handspeed for now, I’m talking about quickness of mind. The guy who recognizes the punching opportunity is going to punch first and get a headstart on punching giving him a huge advantage.
So now that you understand the first step to punching faster is to release your punches faster, let’s work on building quickness of mind. How do you do this, you ask. Real freaken easy, practice everyday on punching fast moving targets. Speedbag and the double-end bag will be your new friend. They will train your eyes and mind to follow fast moving targets and to throw punches when the openings present themselves. When you hit the double-end bag, don’t worry about throwing fast combinations. Instead, try to watch the bag with your eyes and throwing 1 or 2 shots here and there very quickly and accurately. Even when you’re not punching, you are still watching the bag carefully. Do not take your eyes off of it! Again, the first step to acquiring faster punches is to train a quicker mind!

The Right Attitude For Punching Faster

Having the right attitude is critical to building faster punches. I see guys all the time trying to destroy the punching bag when I tell them to punch faster. When I say faster, I don’t mean hit harder. Loading up your punches for more power and more damage is probably not going to make them faster. Quite often, that attitude only makes you swing wider, longer, and with more body commitment.
Punching faster doesn’t mean you put more effort and more force into the punch. It doesn’t mean that you tighten your fist even harder and try to hurt your opponent even more. Having the right attitude for punching faster means that you focus on speed and nothing else. Don’t focus on power or accuracy. Just pure speed.
Instead of imagining yourself punching the guy, imagine yourself trying to touch without him seeing it. Imagine yourself trying to move so fast that he doesn’t even see the punch. You’re not trying to hurt him, you’re trying to surprise him! Now apply this attitude while you’re shadowboxing and while you’re on the heavy bag. You will see that this change of attitude alone can speed up your punches. You’re no longer thinking about trying to break this guy’s chin off–you’re trying to steal his mouthpiece!

This is something I’ve understood for a long long time. This principle will hold true for any sport or athletic endeavor that you pursue. The ONLY way to move at your fastest speed is to be RELAXED! The most relaxed muscle has the most potential for moving at maximum speed. In all sports that you observe, you will see that it is the most relaxed athletes that outperform their opponents. I use to be a track & field sprinter and I will tell you that the most relaxed runners make the best sprinters.
Do keep in mind, there is a fine line between relaxed movement and lazy movement. To be RELAXED in movement means that you are moving with flow allowing your movement to express itself freely without tension and stress whereas being LAZY in movement means that you are moving without control and purpose.
So how does one “relax” for a faster punch? First off, don’t tighten your fist all the time. Instead keep those hands relaxed and tighten them into fists only at the moment of impact. When in doubt, relax those hands even more. Keep your shoulders loose instead of hunched. Don’t flex your biceps or tighten any other part of your body before the punch. A relaxed body will punch faster!

Clear your mind when throwing fast punches. Don’t think of destroying your opponent. That attitude holds tension in your arms and tightens your whole body, slowing your punches and wasting energy. Carrying tension like that also wears your body out faster. When you punch, exhale sharply as you release the arm freely into the punch and allow the body to snap into the punch freely. As soon as the punch is extended, quickly breathe again returning the fist as you throw the next punch. The most common mistake I see with new boxers is that they pull their hand back a little to load up their punch before releasing it. This slows down the punch bigtime since it moves backwards before going forwards. It’s also proof that they’re thinking too much about punching harder and not about punching faster. Don’t think about power, think about touching him quickly.

This is another thing many athletes don’t understand about speed. Quick breathing equals quick movement. Explosive breathing equals explosive movement. If you never heard of this before, try this: try breathing slow but punching fast. I bet you can’t do it. Notice how your body’s movement is timed to your breathing? Now work on breathing not just faster but sharper and quicker. Listen to professional boxers. When they throw a 5-punch combo really fast, they breathe out 5-times really fast. Sometimes when you watch professional boxers shadowbox, they don’t throw full punches. They throw really short or half-length punches that way they can work on faster breathing and faster punches. If you want the ability to punch fast, you have to breathe fast.

If you want some serious handspeed for punching faster, follow the steps above. Don’t be lazy, don’t take shortcuts, and don’t try to invent your own routines. Keep it simple and once you have the handspeed, you can be however creative you want and improve on that. Be aware, be relaxed, breathe faster, and punch faster!
2 More Boxing Guides on Improving Hand Speed: 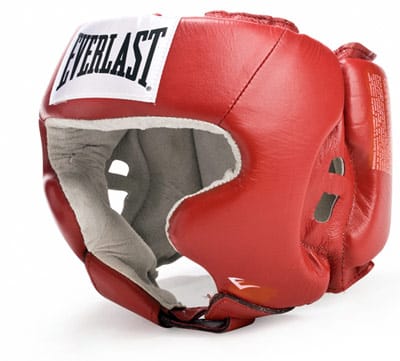 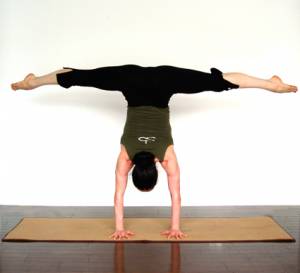 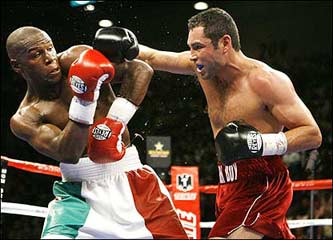